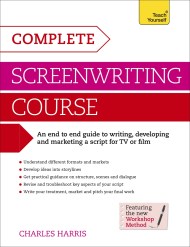 Designed to take you from the moment you first put your pen to paper to pitching and selling your completed screenplay, this is one of…