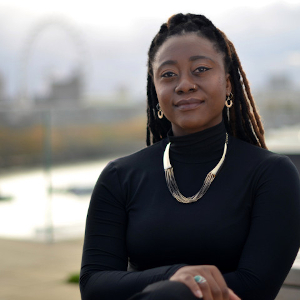 The Returnees, a work of contemporary women’s fiction, tells the story of twenty-five-year-old Osayuki Idahosa, an adventurous British Nigerian woman who has not returned to the country of her birth for many years. When her parents encourage her to do so she is forced to confront the secret behind the paternity of her child. When her close friend, Cynthia Okoye confronts her about her sudden change in behaviour at the child’s naming ceremony, they both look back on the events of the preceding year to uncover who the father of the child is and revisit their shared experiences since relocating to their motherland of Nigeria.

Elizabeth Okoh is a London based, Nigerian writer and photographer with a penchant for storytelling and wanderlust. She holds a joint honours degree in Psychology and Sociology from the University of Sussex and a certificate in Novel Writing and Longer Works from City University of London.

Elizabeth Okoh said: “The Returnees is a story that bolted into my life and I immediately knew it was a story I was called to tell. I was ecstatic when I found out that there was someone else who got the story and loves it as much as I do. It was fascinating to learn that Francine had pitched the book to her team and was championing it. I am so grateful for The Future Bookshelf initiative and can’t wait to work with Francine and the team at Hodder & Stoughton.”

Her editor, Francine Toon said: “I have loved being part of The Future Bookshelf project and working with the rest of the team in our attempts to make the publishing process more accessible and less mysterious. It was exciting to receive our open submissions and read through so many interesting stories. Elizabeth Okoh’s voice and command of plot and characterisation really stood out to me. I love how she whisks the reader away to Lagos and examines the nuances of British Nigerian experience, bringing poignancy, humour and surprises along the way. I am really looking forward to working with her.”

I was hit by the humidity as soon as I stepped out of the airport in Lagos. I wasn’t expecting the air to be so suffocating. I had known it was going to be hot, but this was an unwelcome surprise.

Had it always felt this way? My ten-year-old memory failed to recollect. I tried to avoid the onslaught of touts, as my aunt called them, who offered to help with the trolley. Mum had warned me to be wary of them and wait until I saw Aunty Rosemary. I looked around, trying to see if anything remained familiar. I breathed in deeply. Even the air had changed. I looked around at the chaos: men holding placards printed with different names, awaiting their returnees; maybe those who had been gone for a long while or others who had only been on vacation, others who might even be expatriates. There had been a few of them on the plane. I had looked at the man opposite my aisle and wondered what he had thought of the jubilation when the plane landed.

No one ever called me that except for Mum, so I turned towards the voice.

Sauntering towards me in a bejewelled kaftan was my beaming aunt. She looked gracious as ever and didn’t seem to have aged since she had visited our North London home five years ago. A year apart in age, Mum and my aunty shared the same honey brown complexion, five-foot-five frame and pretty smile. Anyone would mistake them for twins. However, while Aunty Rosemary was chubby, mum was slender; where my aunt was voluptuous, Mum was lithe; and where she was loud and outspoken, Mum was quiet and introspective.

‘Aunty!’ I screamed and held her in a tight embrace. If she wasn’t my mum’s only sibling, I would have declared her my favourite aunt.

She playfully pinched my cheeks and looked me over. ‘You’re still skinny. You get that from your mother, but this,’ she said, referring to the colour of my skin, ‘is all Victor!’

We hugged again before she led me to her car. She said we would have to be quick because she had left the driver parked where they shouldn’t have and didn’t want to risk any fines. I laughed, knowing that if anyone would break the rules, it’d be my aunt, but she mischievously added she wasn’t the only one. It was Lagos after all. ‘When the car park is so far nko. Who likes stress?’ she said and laughed.

In the car, she introduced me to Mr Nelson who, she divulged, would be in charge of seeing that I got to my appointments. Then she looked at me and sighed. I thought I knew what she was about to ask, when she leaned over and patted my knee. I realised Mum had already told her the sordid details. She said she knew just what I needed and that coming to Lagos was a great idea. I rolled my eyes and laughed. Ever since I finished university four years ago, Aunty Rosemary had been on my case to walk down the aisle. If I didn’t know better, I would have thought that she’d leave me in peace, but I felt she had other things in mind, and my broken heart wasn’t going to be a deterrent for whatever she had planned.

It’s funny the turns life takes. Only a month ago, I had been ready to give all of this up, but here I was, in a crazy town, sitting beside an even crazier aunt. I’d have laughed if the sequence of events that had led me here hadn’t been so pitiful. If there was any place to heal, Lagos was it. Lagos had its way of spitting out the weak. It had no pretence of caring, nor did it dote on the aggrieved. Things happen, you move on. That’s exactly what Aunty Rosemary said I needed. I didn’t like to think of what she could have meant, but I smiled, shaking off the repulsive thought of becoming involved with anyone.