A spectacular debut . . . a head-spinning, stomach-churning state-of-the-nation novel about a nation falling apart
Telegraph
All the trappings of a possible future classic . . . a fascinating and accomplished commentary on modern Irish life
Big Issue
A daring, exuberant and generous novel
Observer
There is the humour and the sheer, seething, broiling energy of the prose, which is peppered with the kind of language your mother would call unforgivable. As in Roddy Doyle and Irvine Welsh at their best, it doesn't feel gratuitous. It just feels true
Sunday Times
A rich, touching, hilarious novel
Financial Times
A big, brassy, sexy beast of a book
Irish Times
A superb debut from a confident and comic writer
Mail on Sunday
Fiendishly hilarious
The Times
A rambunctious portrayal of a swaggering off-kilter underclasss
Patricia Nicol, Sunday Times
This year's Baileys prize winner, the interlinked stories of chancers, gangsters and no-hopers in Cork city, is crime caper, teen romance and blisteringly dark social satire all rolled into one. Angry, funny and full of heart
Guardian summer reads 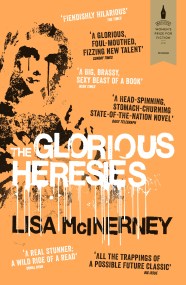