I've been waiting for a novel with vicars, rude old ladies, murder and sausage dogs ... et voila!
Dawn French
Murder Before Evensong has all the elements that make up a classic detective story: a pitch-perfect setting, a genuine puzzle, a gruesome murder (or more) and engaging characters. I enjoyed it very much.
Philip Pullman
Glorious.
Robert Webb
Richard Coles is one of the most sparkling, entertaining, clever and lovable people in public life, as rare and precious to British culture as a Norman cathedral.
Victoria Coren Mitchell
Beautifully written and a warm funny joy from start to finish.
Sarah Millican
Champton joins St Mary Mead and Midsomer in the great atlas of fictional English villages where the crimes are as dastardly as the residents delightful. Canon Daniel Clement must solve mysteries temporal and theological while surviving his parishioners tender ministries. Delightful! And only Richard Coles could pull this off so joyfully and with such style. Biscuit-thieving Cosmo, too, will soon have his own fan club.
Damian Barr
The Reverend Richard Coles gives us a serpent in England's pastoral Eden - and whodunit fans can give praise and rejoice.
Ian Rankin
Perfect for those who like their cosy crime to have a cutting edge.
Ben Aaronovitch
Murder Before Evensong is like a walk in the country on a warm summer's evening... one during which your fellow ramblers can be murdered horribly at any moment. Canon Daniel Clement is an inscrutable and erudite detective, while four-legged sidekicks Hilda and Cosmo are his delightful foils. You'll want to take a front row pew in Champton while this delicious series unfolds.
Janice Hallett, author of The Appeal
An absolute joy from cover to cover - funny, clever and wonderfully plotted. Praise be!
Adam Kay
A good old page-turner with brilliantly drawn characters, from the aristocratic de Floures to Daniel's astute, snobbish mother, and dachshunds so real you can almost smell them.
Rose Shepherd, SAGA, Book of the Month
Britain's favourite vicar might be hanging up the dog collar, but in Murder Before Evensong he proves to be the unlikely heir to Barbara Pym... Coles is free here to unleash a splendidly caustic wit on those parishioners who deserve it... as Daniel locks horns with his flock over the matter of whether the vintage pews in St Mary's can be moved to make way for a new lavatory, Coles rivals Barbara Pym in his ability to make supremely low-stake conflict gripping... Like all the best cosy mysteries, this is comforting but not anodyne. And the style suits the content perfectly: wonderfully feline when it comes to jokes, but moving easily to unselfconscious wisdom when required. Auden would have admired this novel for meeting his requirements for the classical detective story: but he might also have recognised Coles as being, at his best, a fellow artist with words.
Jake Kerridge, THE DAILY TELEGRAPH
Coles' rendering of his fictional church, St Mary's, in the village of Champton, twinkles with quirky detail and sharp humour.
Paul Connolly, METRO
[A] cunning whodunnit... This wise and often beautifully written novel remains most memorable as a sharp but sympathetic portrayal of everyday life in a small community and a clergyman's role within it.
Jake Kerridge, DAILY EXPRESS
Coles' murderous take on a quintessentially English parish makes for a likeable, cosy crime caper.
Jon Coates, SUNDAY EXPRESS
Cosy crime with a cutting edge.
SUNDAY TELEGRAPH
Coles does a wonderful job of bringing his congregation to life... [and] moves seamlessly between humour and something deeper... Charming and funny, it is just what you'd expect from the excellent Coles.
Alison Flood, THE OBSERVER, Thriller of the Month
A wry, tongue-in cheek and whimsical debut with more than a trace of G. K. Chesterton's Father Brown... charming.
Geoffrey Wansell, DAILY MAIL
Violent deaths aside, it's a cosy world of Desert Island Discs, flower rotas and walnut cakes, beautifully written and evocative, run through with the comforting, ancient liturgical rhythms that transport you to Evensong and gentle organ music in a cool country church on a summer's evening.
Kate Green, COUNTRY LIFE
This has all the ingredients of a brilliant new cosy crime series.
Susan Watson, MY WEEKLY
Coles has a gift for subtle comic writing... beyond the fascinating story with its rich characters, the real discovery here is the sniffing out of the author's formidable talent for writing about English life with English humour. Roll on the rest of the series!
The Reverend Jonathan Aitken, THE OLDIE
A brilliant crime romp set in a village full of gossip and secrets.
Zoe West, WOMAN'S WEEKLY
A deliciously thrilling murder mystery.
Susan Watson, WOMAN'S WEEKLY SUMMER SPECIAL
He's very good on the nitty-gritty of a clergyman's life. His likable protagonist Canon Daniel Clement's struggle to get parishioners to accept the installation of a new church toilet is every bit as gripping as his investigation of the inevitable series of mystifying murders.
John Williams, MAIL ON SUNDAY
Coles is a sharp observer of human nature, but his observations are tempered with both humour and compassion, and much of the pleasure in the book lies in the incidental asides.
CAROLINE CHARTRES, CHURCH TIMES
Even better than I knew it would be. Really well plotted... beautifully written, charming without being twee, funny, intelligent and mordant too. It's cosy, yes, but waaay better than "cosy crime" suggests.
India Knight, SUNDAY TIMES
Coles adds another string to his bow with this witty, Barbara Pym-ish village whodunnit about a crime-solving cleric.
THE DAILY TELEGRAPH, Best Holiday Reads 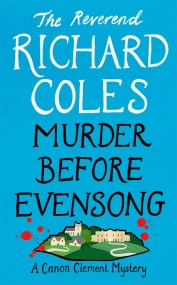