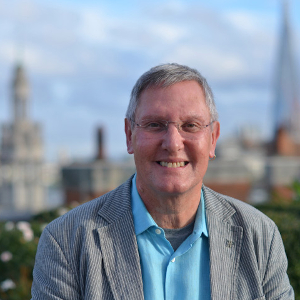 In 1841 the ‘peasant poet’ John Clare escapes from an asylum in Epping Forest, where he had been kept for four years, and walks over eighty miles home to Northamptonshire. In 1995, with his life in crisis and his own mental health fragile, Robert decides to retrace Clare’s route along the Great North Road over a punishing four-day walk. Part memoir, part travel-writing, part literary criticism, A Length of Road is a deeply profound and poetic exploration of class, gender, grief and sexuality through the author’s own experiences and through the autobiographical writing of Clare.

Robert Hamberger is a published poet of six pamphlets and three collections, who works have been broadcast on Radio 4 and published in the Observer, New Statesman, The Spectator, Poetry Review and Gay Times.

Robert Hamberger said: “I’m proud to be the first non-fiction writer to be published through The Future Bookshelf. Nearly 200 years after John Clare’s first book there shouldn’t still be a class divide in publishing, but the obstacles remain. This book has taken me twenty-three years of drafting and redrafting through self-doubts and life changes. When I submitted my work to The Future Bookshelf it felt refreshing to imagine that an acknowledgement of the continued barriers facing underrepresented writers meant my words would be read sympathetically. It’s liberating to work with my editor on A Length of Road.”

His editor, Kate Craigie said: “I was delighted to discover Robert’s memoir among the small number of non-fiction submissions. Immediately the quality of the writing stood out, and reading revealed a timely, deeply moving, genre-bending memoir that I am extremely excited to be publishing onto the JM Originals list. Finding a writer like Robert highlights how important it is that the publishing industry reach out to more diverse writers and communities, and I’m proud to have been a part of The Future Bookshelf team.”

In a neat front garden a woman in her sixties dressed in a black top and dark blue skirt carefully fills a black dustbin-liner with grass cuttings beside her lawn mower. I tell myself she’s recently widowed: hence her dark clothes. I think filling a dustbin-liner might be part of her resolve to survive. As I walk past the garden I admit I’ve no idea what’s happened to her. All I know is my own resolve to survive includes a four-day walk over Easter back towards my home. It’s as meaningful as filling a bag with grass-cuttings. Anything that gets me or the woman in the front garden up in the morning gives either of us a reason to live.

My schoolfriend Clifford crowds my teenage journals with his opinions, his jokes, the books he read, the artists he liked and his anxieties. We felt easy in each other’s company. We discovered and explored an incredible new landscape together, peopled by exotic creatures like Virginia Woolf, T.S.Eliot, Katherine Mansfield, Matisse, Henri Gaudier-Brzeska and Rembrandt. Our plan was that Clifford would be the artist and I would be the writer and we would both make a splash in our respective worlds, show the middle-class wankers who occupy art and literature what ‘true’ art from a working-class background looked like. We would shake them up. We clubbed together and felt stronger, less isolated by doing so.

Clare was less fortunate. Although he enjoyed friendships, his writings about his early life show few allies in poetry to keep him going. He wrote: I made but few close friendships for I found few with the like tastes inclinations and feelings. When he walked with his friends in the fields I often try’d their taste by pointing out some striking beauty in a wild flower or object in the surrounding senery to which they woud seldom make an answer, and if they did twas such as ‘they could see nothing worth looking at’ . . . I thought somtimes that I surely had a taste peculialy by myself and that nobody else thought or saw things as I did.

Clare’s right that nobody else thought or saw things as he did. Isolation for him becomes celebration for his readers. He writes powerfully about feeling different from his fellow-villagers, being part of a class where writing poetry was not meant to have any place: chilling damp with fear whenever I thought of it, the laughs and jeers of those around me when they found out I was a poet was present death to my ambitious apprehensions for in our unlettered villages the best of the inhabitents have little more knowledge in reading than what can be gleaned from a weekly Newspaper.

As teenagers Clifford and I wanted to be part of that arty world from which we initially felt excluded. We met as eleven-year-olds, on our first morning at Parmiter’s, one of the last grammar schools in Hackney. A couple of hand-picked working-class boys (it was a single-sex school) who’d been offered a chance to use selective education to climb away from our background, if we wanted to take it. Of course, we didn’t understand that possibility then. We were simply two bright boys from fatherless families who felt we’d pleased our mothers by being chosen.

During school holidays we would often catch a bus from the East End to the West End and wander round Foyles and the Charing Cross Road second-hand bookshops, and the National and Portrait Galleries, where we saw Hilton’s portrait of Clare, in his olive-green jacket, his leafy gold and steel-blue cravat, dull yellow waistcoat. That luminous expression on his face, staring past us slightly upwards towards inspiration in the distance, lips parted and tousled auburn hair, as if he looked every inch the starry young poet. It was painted on his first trip to London, commissioned by his publisher to boost publicity for this peasant poet making his name in the capital. It’s no wonder he’s looking inspired. The world’s eyes are on him.

Clifford loved opera, so we improvised and recorded a sung version of ‘The Waste Land’ on cassette, using his battered red piano and my voice. He painted Don Quixote and Sancho Panza on his bedroom wall overlooking the cemetery. Once at the Tate we saw Henry Moore with his walking stick gradually circling Rodin’s The Kiss, admiring it with a few hangers-on. It seemed to us like an ageing hero had descended from some higher place of art to breathe our air. One morning beside St James’ Park we slipped unnoticed for free into an ICA exhibition of Picasso’s erotic etchings. We must have arrived before the exhibition opened, as we had the gallery to ourselves. All those finely-drawn etchings of the artist and his nude models, minotaurs and nymphs, flouting intricate penises and vaginas looked thrilling to a couple of teenage boys, however artistic our inclinations, as if they represented another magical world from which we were – at that moment – excluded.

A man sponges his car, suds dribbling across the roof and onto the windscreen. Couples pull out from driveways into queues of stalled traffic. I wonder where everyone’s going, to which good place. I imagine what it might be like to live inside a settled routine again: to plan to wash your car on Good Friday morning, before taking your wife and kids out for a casual drive. I feel miles from my kids, feel sorry for them having a father who’s left and appears to be walking away.

It felt as if I met Clare again when I met Dee at eighteen, and I associate Clare with her. When we were falling in love as English Literature students, she told me about reciting his sonnet ‘First Sight of Spring’ in a local elocution competition as a child:

The squirrel sputters up the powdered oak

With tail cocked o’er his head and ears errect

Startled to hear the woodman’s understroke

And with the courage that his fears collect

He hisses fierce, half malice and half glee

She dramatised her reading to me, wide-eyed, showed me how as a girl she would have relished that lovely dialect word sputters to describe a squirrel skittering up a trunk. I was over head and ears in love, as Clare describes it. I’d never met anyone like her. I was a city boy swept away by the thought of squirrels sputtering up trunks; by her teaching me how dead-nettles don’t sting if you look out for their creamy flowers; how goose-grass clings to the shins of your jeans if you walk through it; how cuckoo-spit hung on the intersections between stems and leaves like clusters of caught snow. I’d never noticed before.

When we travelled to her home in Northamptonshire I remember her poking a grass-spear into cuckoo-spit, though the insect hidden inside had already disappeared. She found little yolk-yellow flowers tinged with red she called ‘eggs and bacon’, and low-lying tiny blue flowers she called ‘grandmother’s eyes’. The roadside and meadow flowers had names that sounded like poetry: campion, birdsfoot-trefoil, cranesbill, periwinkle, vetch, herb robert, shepherd’s purse, where she split open the heart-shaped purse and showed me money-seeds inside. She taught me the proper way to use a kissing-gate, with a kiss over the slats to allow you through. Once she taught me about peeling back the dirty pennies of honesty to unwrap their ghostly coins. There was a wider world than London, a different England, and I was discovering it through her.